HIM QUEEN WITH CORBETT & NANITAL

Uttarakhand is a State of outstanding natural beauty. Most of the northern parts of the state are part of Greater Himalaya ranges, covered by the high Himalayan peaks and glaciers, while the lower foothills were densely forested till denuded by the British log merchants and forest contractors after independence. The unique Himalayan ecosystem plays host to a large number of animals (including bharal, snow leopards, leopards and tigers), plants and rare herbs. Two of India’s mightiest rivers, the Ganga and the Yamuna take birth in the glaciers of Uttarakhand, and are fed by myriad lakes, glacial melts and streams in the region. The tourism industry is a major contributor to the economy of Uttarakhand, with the Corbett National Park and Tiger Reserve and the nearby hill-stations of Nainital and Bhimtal and several other hill-stations like Mussoorie, Almora and Ranikhet being among the most frequented destinations of India. To this region also belong some of the holiest Hindu shrines, and for almost 2000 years now, pilgrims have been visiting the temples at Haridwar, Badrinath, Kedarnath and Jageshwar in the hope of salvation and purification from sin. Rishikesh near Haridwar has the major spiritual and yoga centers of India. Gangotri and Yamnotri, the sources of the Ganges and Yamuna also fall in this region and are revered by many. Besides these most popular pilgrim centers, the state has an abundance of temples and shrines, references to most of which can be found in Hindu scriptures and legends. The architecture of most of these temples is typical of the region and slightly different from other parts of India, the ancient temples at Jageshwar being the most popular for their architectural importance. Uttarakhand is comprised of two regions, the western half known as Garhwal and the eastern region going by the name of Kumaon, the two having different chieftains in history and different lingual and cultural influences due to proximity and neighborhood of different cultures. Inseparable and complementary nature of their geography, economy, culture, language and traditions, however, have formed strong bondages between the two regions.

Mussoorie  is a wonderful hill station in Uttaranchal.It is situated at the foothills of the Himalayas and is known as the Queen of the Hills. Mussoorie derives its name from the plants of Mussoorie or shrubmansoor which are available in large quantities in this region. The lush green hills, the varied flora and fauna and the majestic view of the Shivalik ranges and the Doon Valley attracts hundreds of tourists both domestic and international to Mussoorie each year. Mussoorie is famous not only for its scenic beauty but it has also developed into an important center of education and business. Mussoorie is also famous for the Lal Bahadur Shastri National Academy of Administration where officers are trained for the Indian Administrative Service and the Indian Police Service. Arrive at Mussoorie  transfer to hotel, check in to hotel, rest of the day free at Leisure. overnight stay at hotel at Mussoorie.
2

Leisurely  after breakfast, visit to Kempty fall, Kempty fall, municipal garden, Gun hill,  Company Garden, Mall road etc.  Lal Tibba : This is regarded as the highest point in Mussoorie situated in area called “Landour”  Which is know to be the oldest inhabited place of Mussoorie Gun Hill : Gun hill is the second highest point in Mussoorie.it is also known as picnic spot for the locals. From this points, Mussoorie appears to be changing colors in every minute.It looks amazing from here. Municipal Garden : This is also known as Botanical Gardens of Mussoorie were established by geologist Dr. H.Fackner in the last century. Kempty Fall : Kempty fall is just 12 kms down from Mussoorie on Mussoorie – Dehradun midway ,the beautiful falls were declared as a tourist destination by John Mekinan after 1835.The name empty is derived from ‘Camp – tea’, as the Britishers would organise their tea parties here. Past Kempty Fall, 12 – km downhill. After back to the Hotel For Over Night.
3

After breakfast, visit Lal Tibba, which is the highest point in Mussoorie. A 20 meter tall tower is situated at the edge of cliff, with a telescope. One can take close look of the mighty Himalayas. Later, proceed to Corbett National Park–formerly Hailey National Park, is the oldest national park in India which came into existence in 1936, lies on the foothills of Himalayas, to protect the endangered species of Royal Bengal Tiger. Corbett is a home to densest tiger population in the world which guarantees the glimpses of the elusive big cat in its premises. It is a vast Eco-Sphere that is blessed with the plethora of wildlife where you can enjoy several activities like jungle safaris, trekking, bird watching, elephants ride and much more. Upon arrival, spend rest of the evening at leisure. Dinner and overnight stay in Corbett.
4

Early morning and afternoon game drive to the national park. Other residents of the park include four kinds of Deer, Wild Boar and some lesser-known animals. Leopards are mostly found in the hilly areas of the Corbett Park. Some nocturnal cats found here are the Leopard Cat, Jungle Cat and Fishing Cat. Sloth Bear is found in the lower regions of the park while the Himalayan Black Bear is seen in the higher hills only. The Dole or Wild Dog, though they can be seen in the southern areas of the park along with the Jackal. Some of the smaller residents of the park are Himalayan Palm Civet, Indian Gray Mongoose, Common Otter, Black Naped Hare and Porcupine. Elephants are among one of the main attractions of Jim Corbett Park.Later today drive towards Nainital. Upon arrival, check-in hotel, enjoy dinner and overnight stay.
5

This was a popular summer vacation resort for the British. In 1817, the commissioner of Kumaon, G.W. Traill was the first European to visit the place. However, he did not mention about the place among his folks in order to retain the religious sanctity of the place. Later, British sugar trader P. Barron settle down here and built a colony for Englishmen on the banks of the lake. After breakfast, take a show-around tour of the most prestigious heritage resort of Nainital, historically referred to as the residence of the maharaja of the Pilibhit. Thereafter, enjoy sightseeing tour starting with Tiffin top and Land’s End. Both offers excellent views of neighboring hills and green valley with rural houses. Later, trek for 6 kms or hire a pony to reach at the highest point called Cheena/Naina peak, which offers snow clad peaks of the Himalayan range, bird eye view of Naini Lake and Nainital town. In evening, enjoy a boat-ride in Naini Lake or take a stroll on adjacent Mall road. Spend evening at leisure, followed by dinner and overnight stay at the hotel.
6

After breakfast, drive to Ranikhet – means Queen’s meadow. In 1869 the British established the headquarters of the Kumaon Regiment here and used the station as a retreat from the heat of the Indian summer. Till date, it is home to the Kumaon Regiment and bristling with good old-fashioned military atmosphere, spreads over rolling green hills with some lovely views over the distant Himalaya. Upon arrival, check-in Hotel/ resort. Dinner and overnight stay in Ranikhet.
7

Departure from Delhi After breakfast, you will be transferred to Delhi airport for return flight back home. 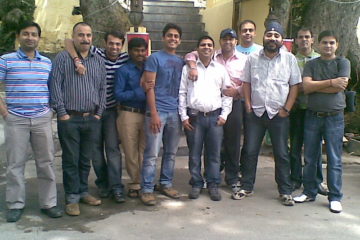