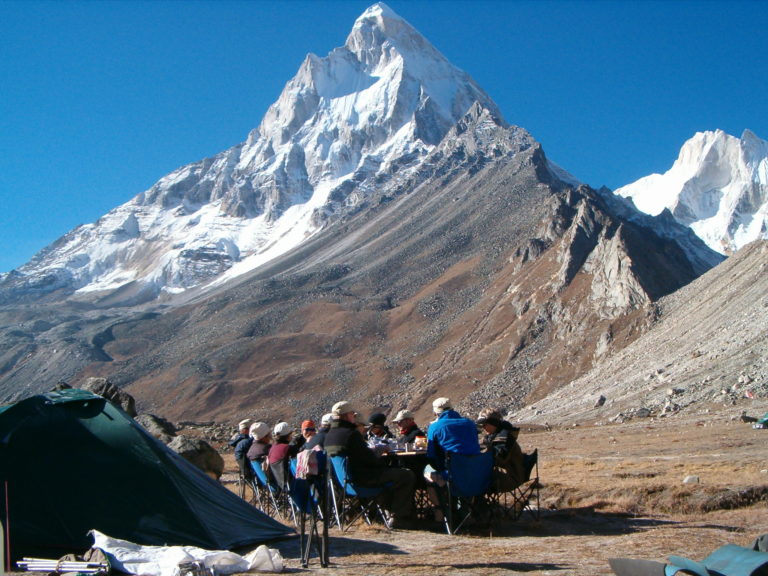 Uttarakhand has a great diversity of flora and fauna.  Uttarakhand is home to rare species of plants and animals, many of which are protected by sanctuaries and reserves. National parks in Uttarakhand include the Jim Corbett National Park (the oldest national park of India) at Ramnagar in Nainital District, and Valley of Flowers National Park and Nanda Devi National Park in Chamoli District, which together are a UNESCO World Heritage Site. Chital crossing forest path at Jim Corbett National Park,Leopards are found in areas which are abundant in hills but may also venture into the lowland jungles. Smaller felines include the jungle cat, fishing cat, and leopard cat. Other mammals include four kinds of deer (barking, sambar, hog and chital), sloth and Himalayan black bears, Indian gray mongooses, otters, yellow-throated martens, bharal (goat antelopes), Indian pangolins, and langur and rhesus monkeys. In the summer, elephants can be seen in herds of several hundred. Marsh crocodiles (Crocodylus palustris), gharials (Gavialis gangeticus) and other reptiles are also found in the region. Several freshwater terrapins and turtles like the Indian sawback turtle (Kachuga tecta), brahminy river turtle (Hardella thurgii), and Ganges softshell turtle (Trionyx gangeticus) are found in the rivers.

Uttarakhand can be divided into several physiographic zones, all running parallel to each other from northwest to southeast. The northern zone, popularly known as the Himadri, contains segments of the Zaskar and the Great Himalaya ranges, with elevations ranging roughly from 10,000 to 25,000 feet (3,000 to 7,600 metres). Most of the major peaks are located in this zone. Adjacent to and south of the Great Himalayas is a zone containing the Lesser Himalayas, known popularly as the Himachal, with elevations between about 6,500 and 10,000 feet (2,000 to 3,000 metres); the zone has two linear ranges—the Mussoorie and the Nag Tibba. To the south of the Himachal is a stretch of the Siwalik Range. The entire area containing the Himadri, the Himachal, and the Siwaliks is broadly known as the Kumaun Himalayas. The southern edge of the Siwalik Range merges with a narrow bed of gravel and alluvium known as the Bhabar, which interfaces to the southeast with the marshy terrain known as the Tarai. The combined Siwalik-Bhabar-Tarai area ranges in elevation from 1,000 to 10,000 feet (300 to 3,000 metres). South of the Siwaliks are found flat-floored depressions, known locally as duns, such as the Dehra Dun.